We are very excited bceause in Miami we lived in a Condo with a teeny tiny balcony. When we made the jump over seas we chose to live in a suburb of Athens so for the first time we have a bit more space.

Our Villa has an amazing courtyard and garden as well as three different balconies. 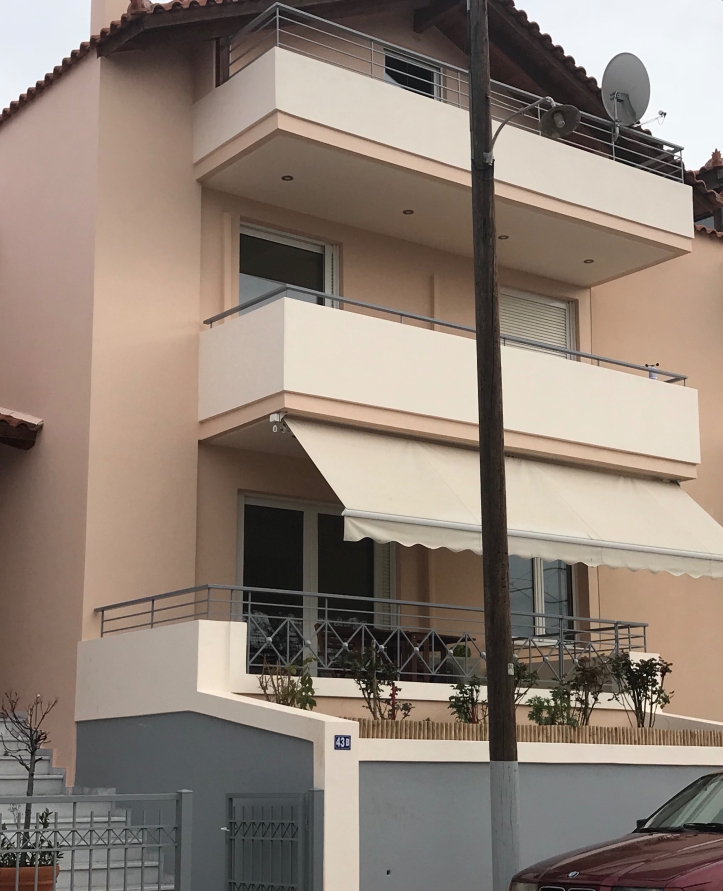 I love flowers, plants, and haveing a beautiful space outside to be with natuer. Without  actually leaving civilization and being in natuer. Unfourtunatly I can not keep green things alive. It is not my talent. In fact I have the opposite of a green thumb, a brown thumb. However my husband he can grow things. He is like magic with plants. He is the master provider for everything in his care and that extends to plants.  Which means Lola will get her garden. 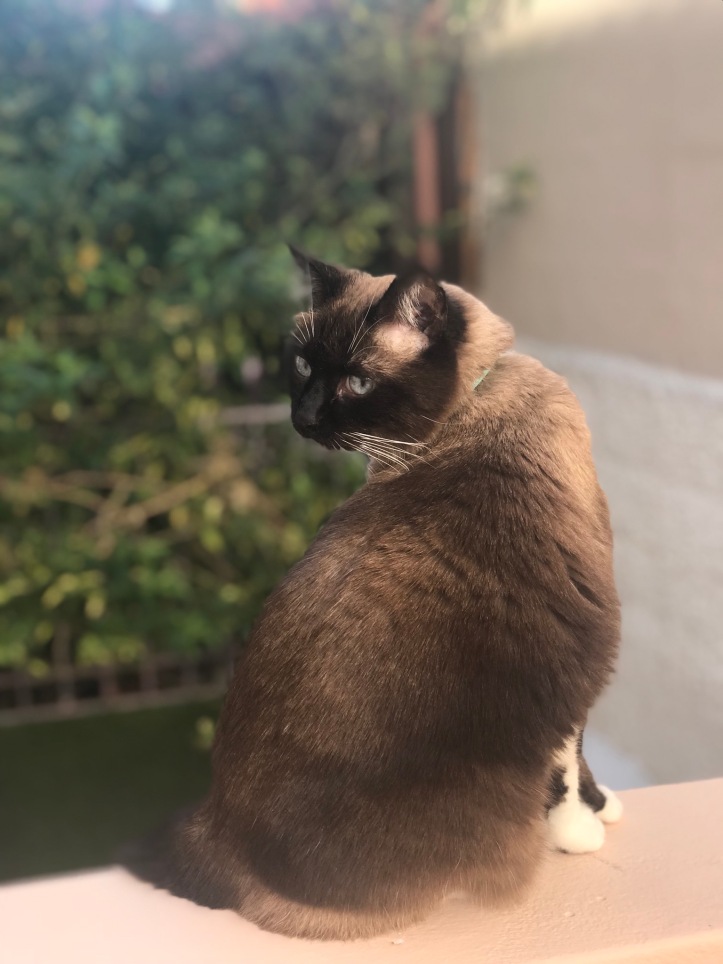 We just have to secure it or kitty proof it. Now Lola is an ederly cat, she does not have claws, and we just cant allow her to wounder off. For many reasons all the other community cats that dominate the outdoors, and the wild dogs in the area, she will get bullied, eaten, or catch a germ and she is almost 15 years old, she can’t fight that. We also do not want other kitties to be able to get in, our place is already dog proof unless they are really motivated and/or we forget to shut the front gate.

All the stray/wild dogs make me nervous. I have seen packs of them hunting for cats in the empty lot across from my house on a few occasions. 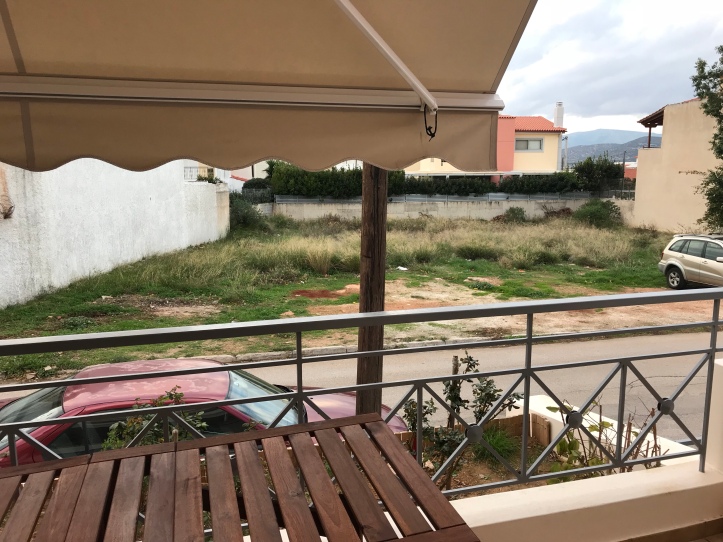 My husband has also seen one of them catch and kill a kitten in front of him, then prance off to eat it. All while my husband and some local kids who happened to be there were screaming at the dog to stop. (Next time I see that one if I can snap a pic I will. I call him “Kitty Killer”)

The dog packs are generally uninterested in humans and vice versa. The greeks have the philosophy of mutual respect. They let the dogs roam and be free and do what dogs do. A lot of the times the dogs will have collars and while they run around during the day they do have a home to go to. This is the same in the Center of Athens all the shops have dogs but the dogs are free to roam the city and come back for closing at night time. Its not uncommon to see a whole bunch of these dogs (well fed) sun bathing in front of The Greek Parliament building in Syntagma square.

The front balcony is pretty much dominated by the comunity cats it is also imposable to cat proof, it is safe from the wild dogs though. So At any given time we have 3 of the kitties on our front balcony sometimes as many as 8. In Greece the saying is “better Cats then Rats” and the whole block feeds them. 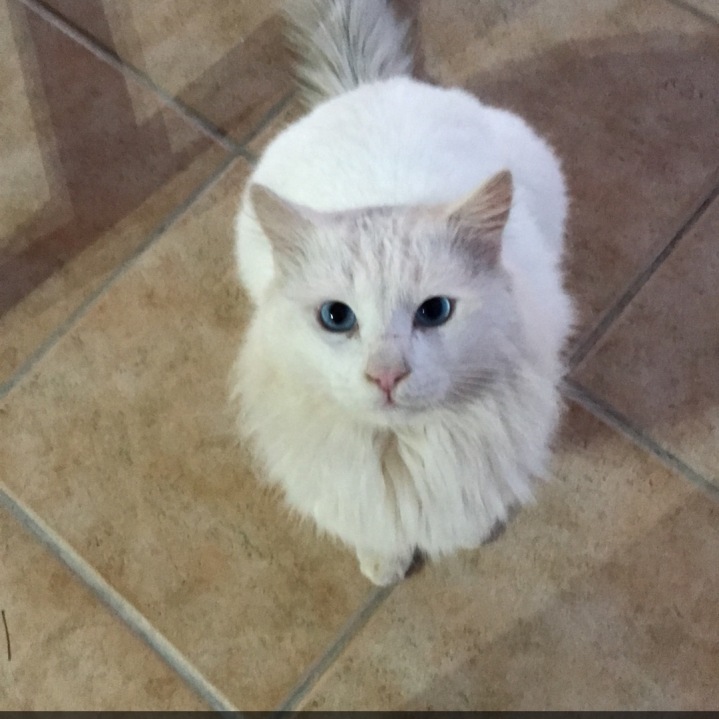 The neighbors named him ουρανός 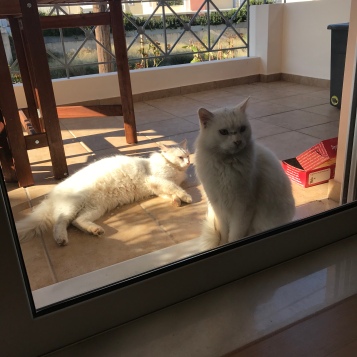 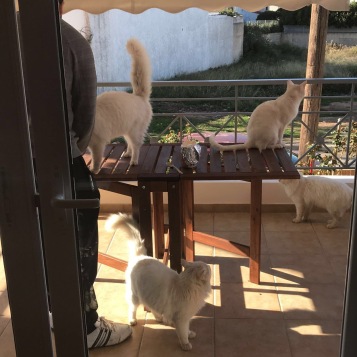 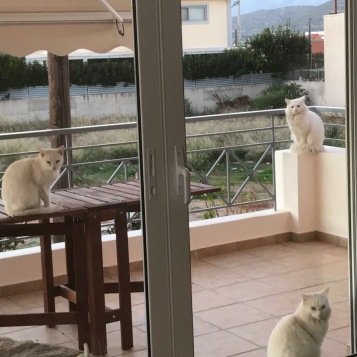 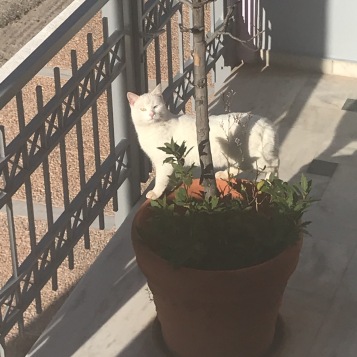 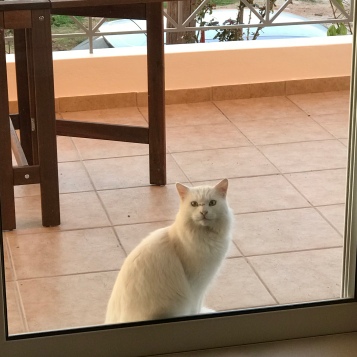 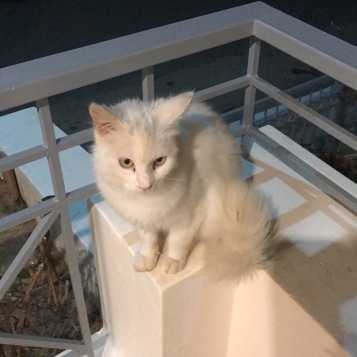 So these kitties are sweet, you can pick them up,and pet them.  However they are outside community cats so I doubt they have been Vaccinated. They get in brutal teritorial fights and have serious claws. We do however enjoy them. We even made little houses for them from our moveing boxes because it does get chilly at night. 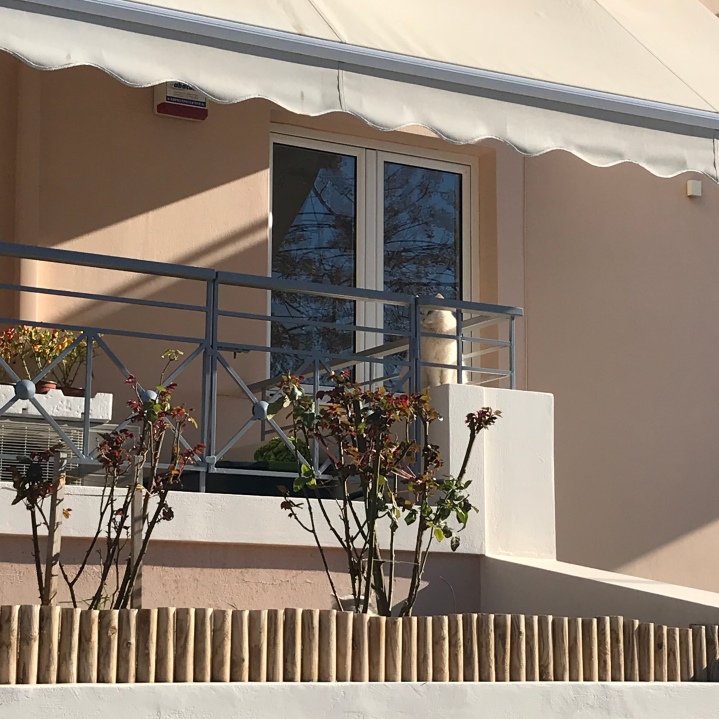 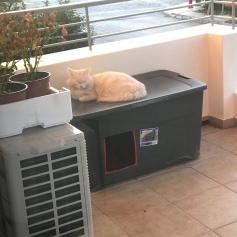 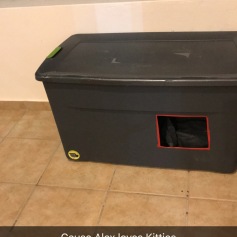 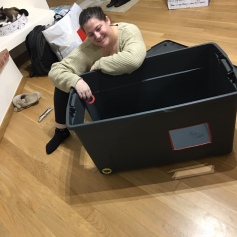 I did ask my neighbors if I could fix and vaccinate them but Greeks do not like the idea of altering an animal and vetoed that idea. Even though it would make them so much healthier.

Now the courtyard is in the back and we need to cat proff it. However I am not so sure how that is going to go. Its almost impossible to cat proof and Lola is clever.

The first thing we did was seal the gate seperateing properties. 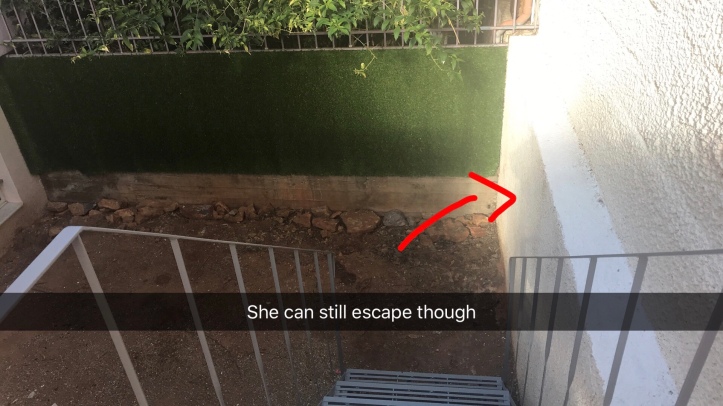 The first thing Lola did was inspect it, then crawl underneath it. So now we have to figure out a way to attach it to the concrete along the bottom. 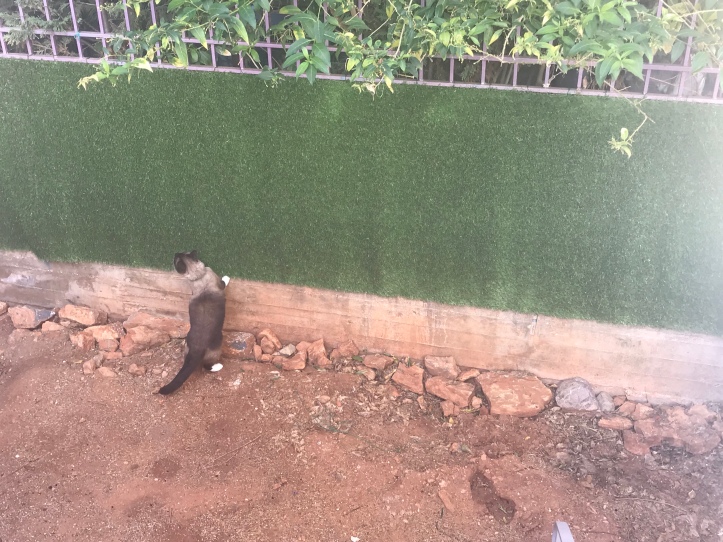 Then when I panicked and caught her half way under the fake grass and scolded her, then put her back inside in a time out. She was like “ha let me show you all the ways I can escape.”

She can just prance along this nice little wall into the neighbors yard. They have a dog so that is some what of a deterrent. I will have to find something to block her with. Maybe a super heavy plotted plant. 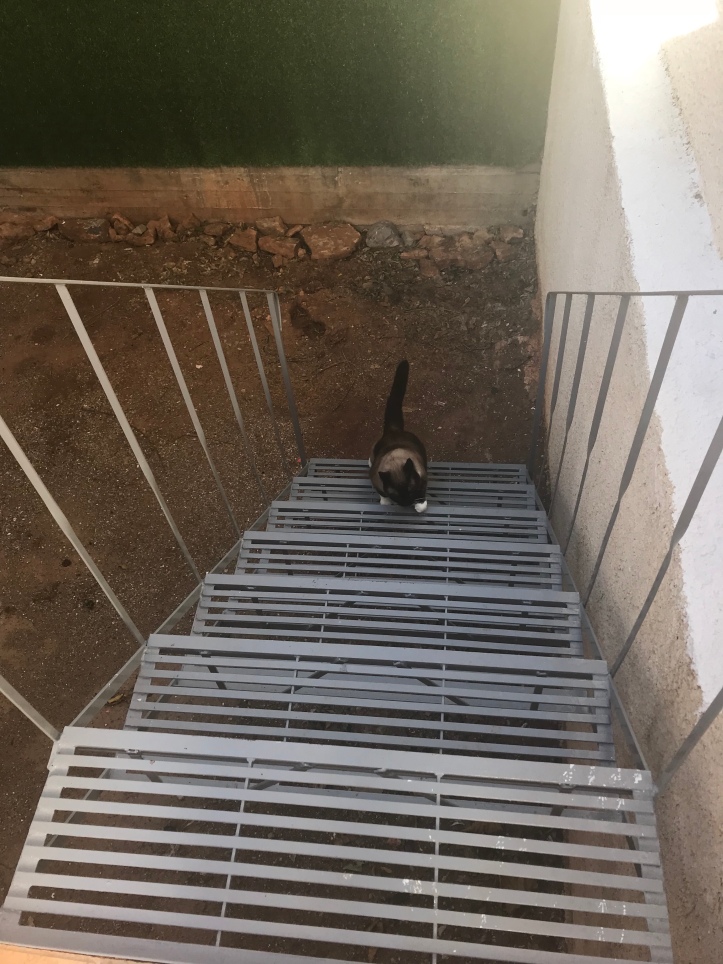 You can see how Lola can easily get onto the ledge and walk into the neighbors yard. Lola walking up the stairs is so cute. She is old and has never seen stairs so I had to show her how to do it. She is very cautious. 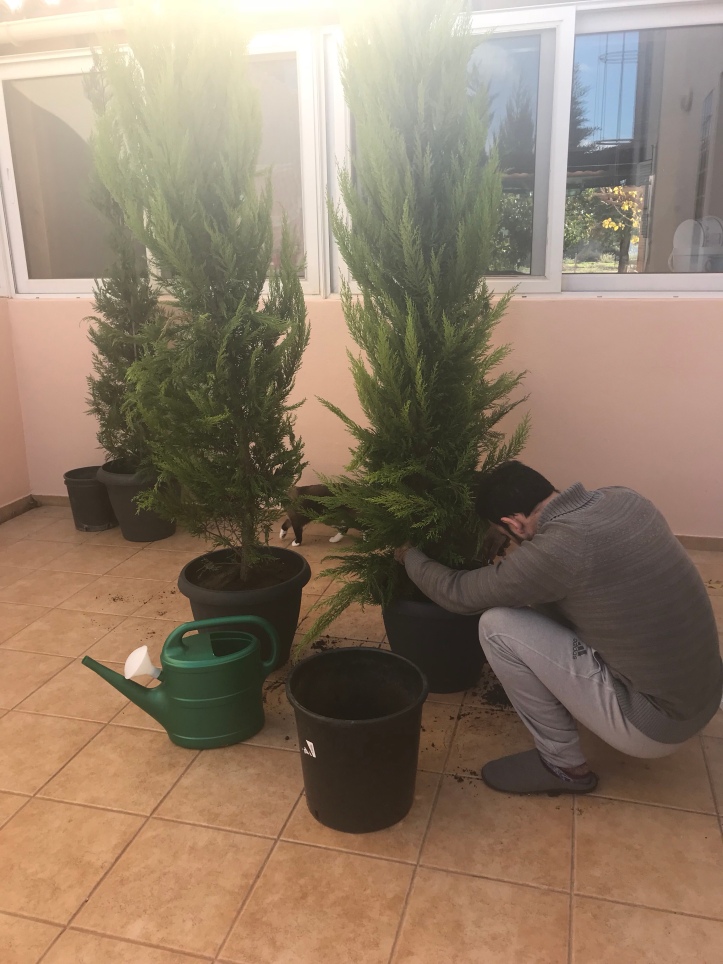 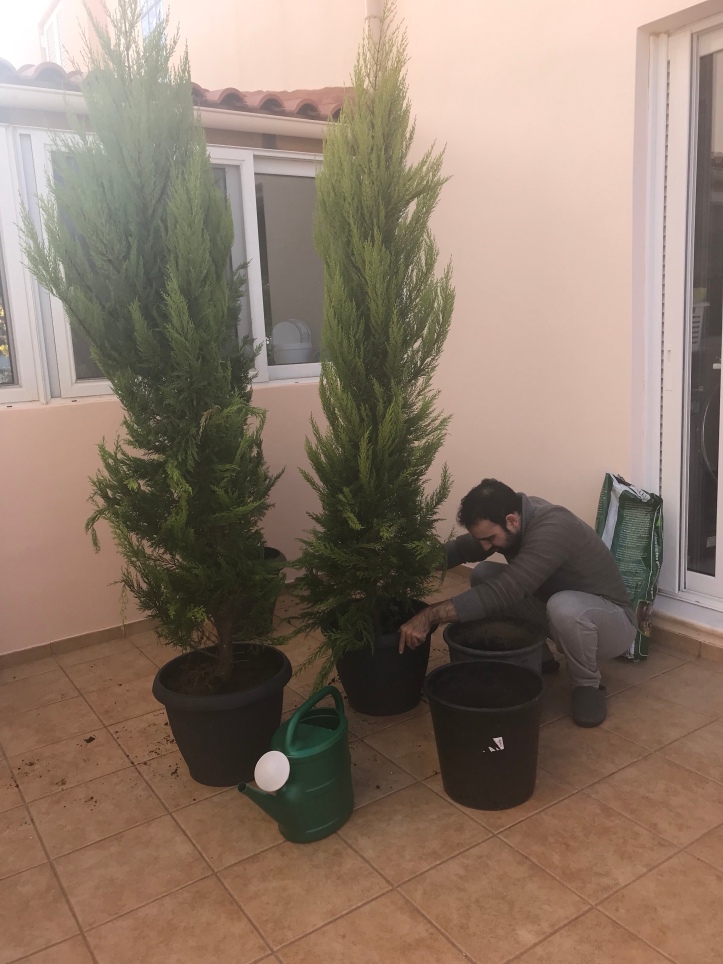 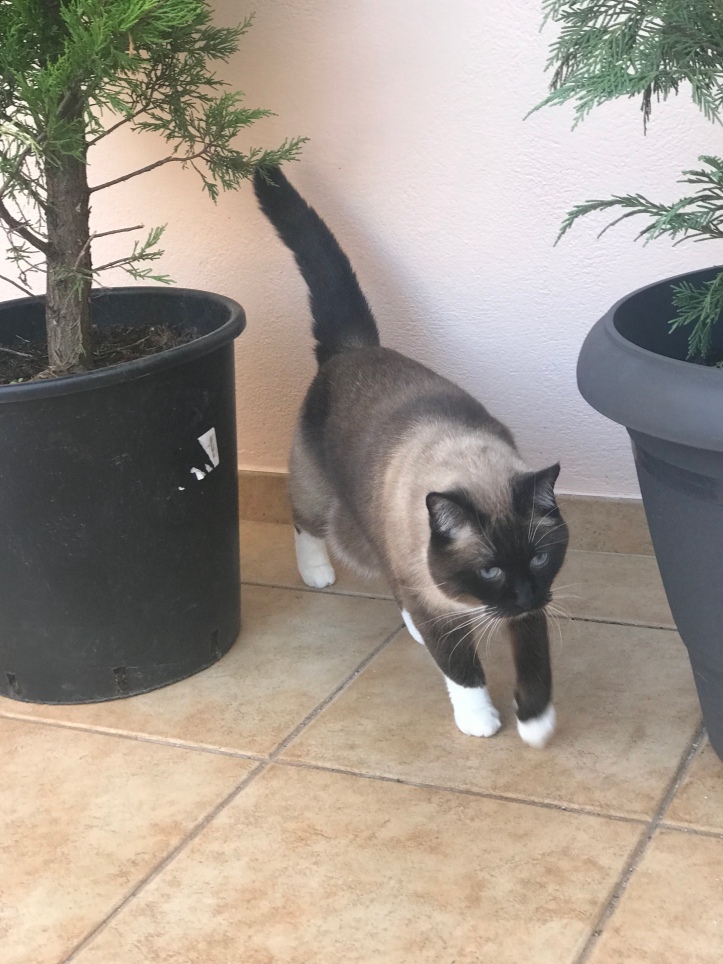 Next we got some privacy “Christmas” Tress for the other wall. These are a type of greek tress that they commonly call christmas tress. When my husband told me he was getting Christmas tress for privacy I was “YES!” Because I thought they were the sweet smelling evergreen pine type we had in the states. I was mildly disappointed.

We also got fresh herb plants for one of the walls, which are great for cook and serve to block an escape route. 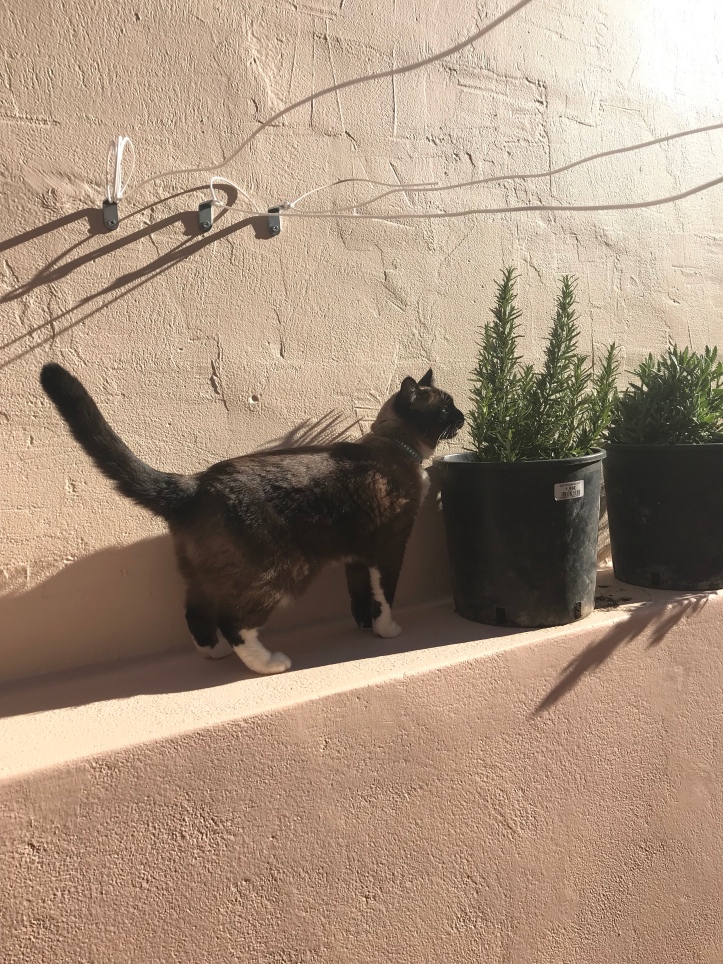 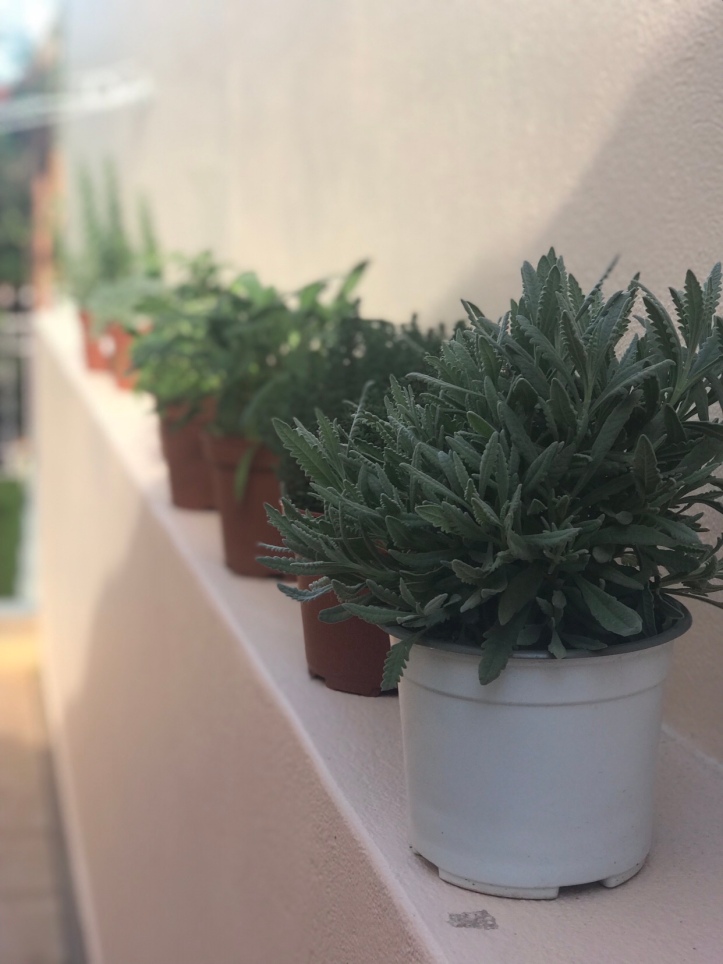 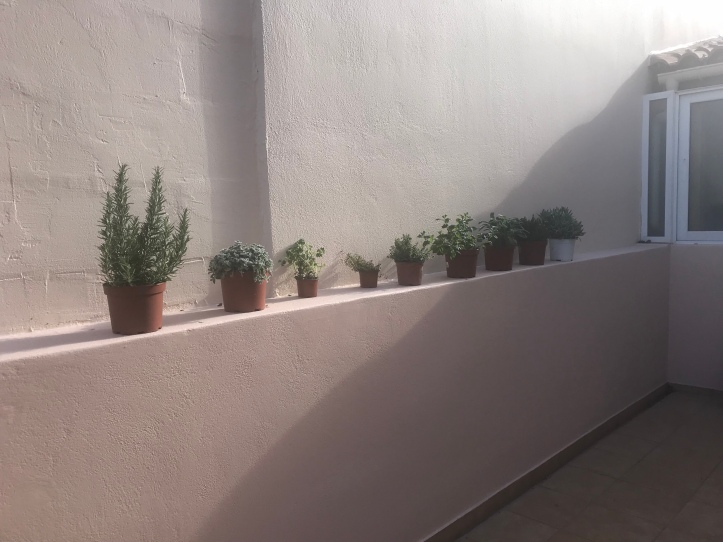 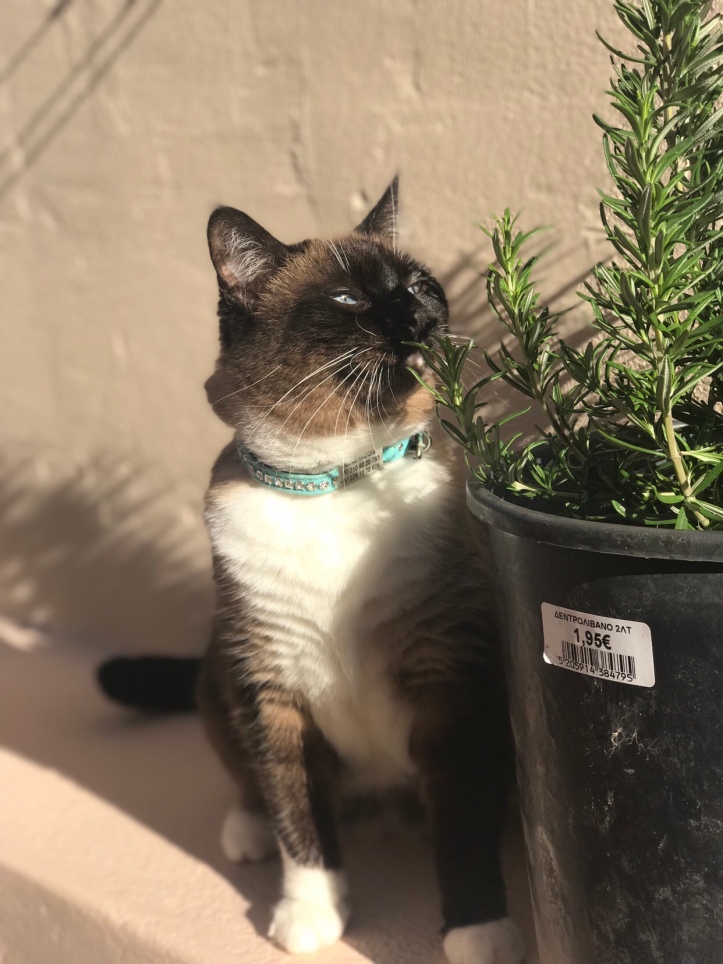 These are great because they block lola from getting to close to the neighbors garage and escaping over the roof. 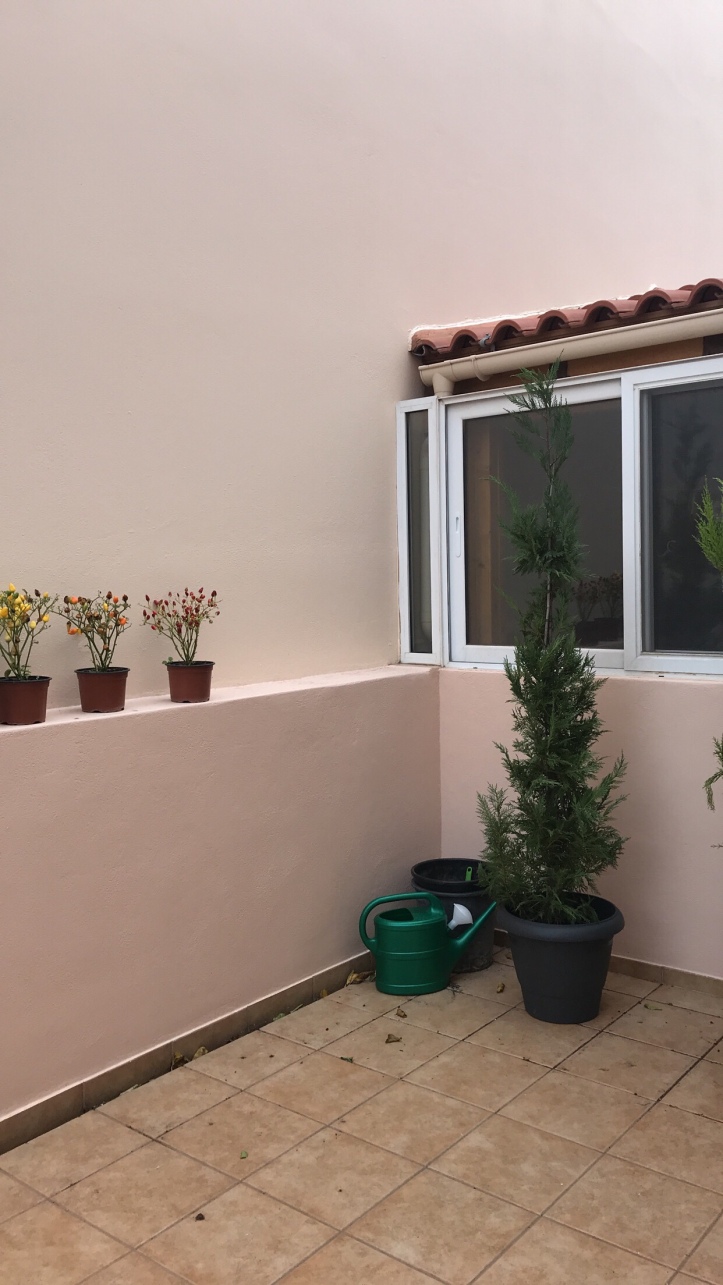 See she can jump from the ground to the wall to the roof. So if we fill up the ledge it blocks lola from jumping. 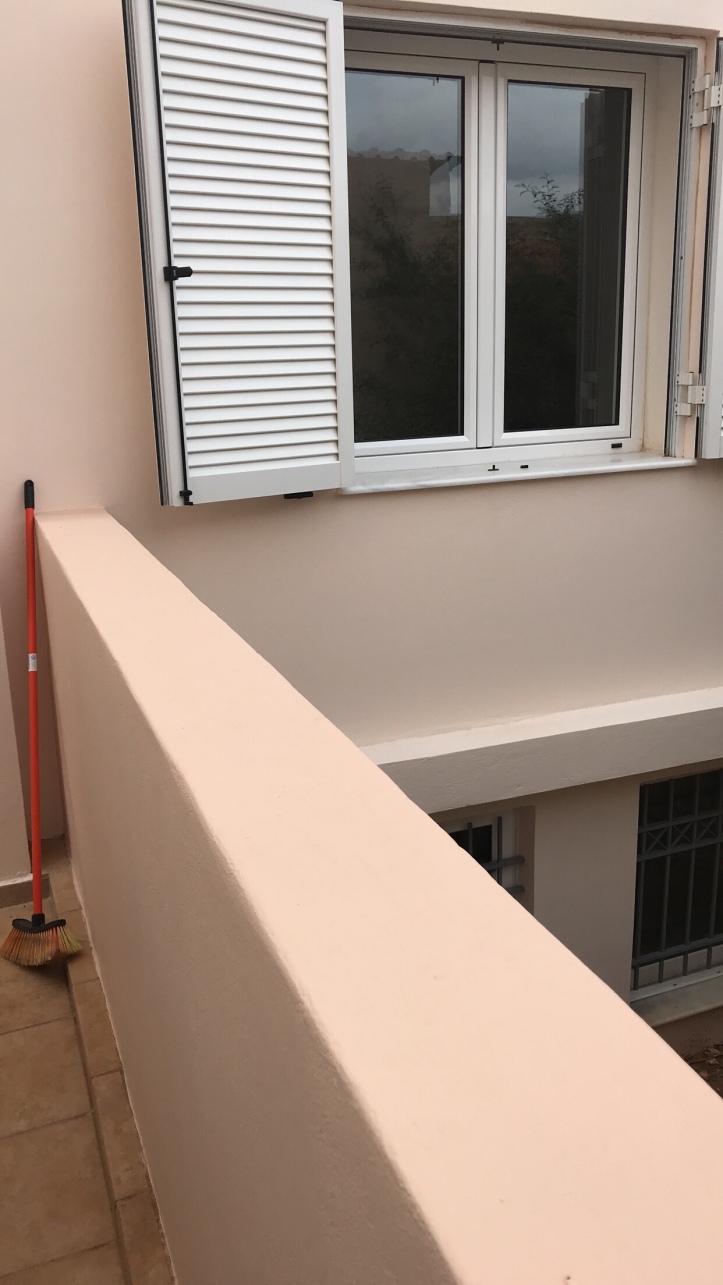 Another way Lola cause trouble is that she loves to sit on this ledge that separates the court yard from the lower garden.

She wants to jump down to that ledge or over to the window. They are just a smidge out of her range but I always catch her trying to. 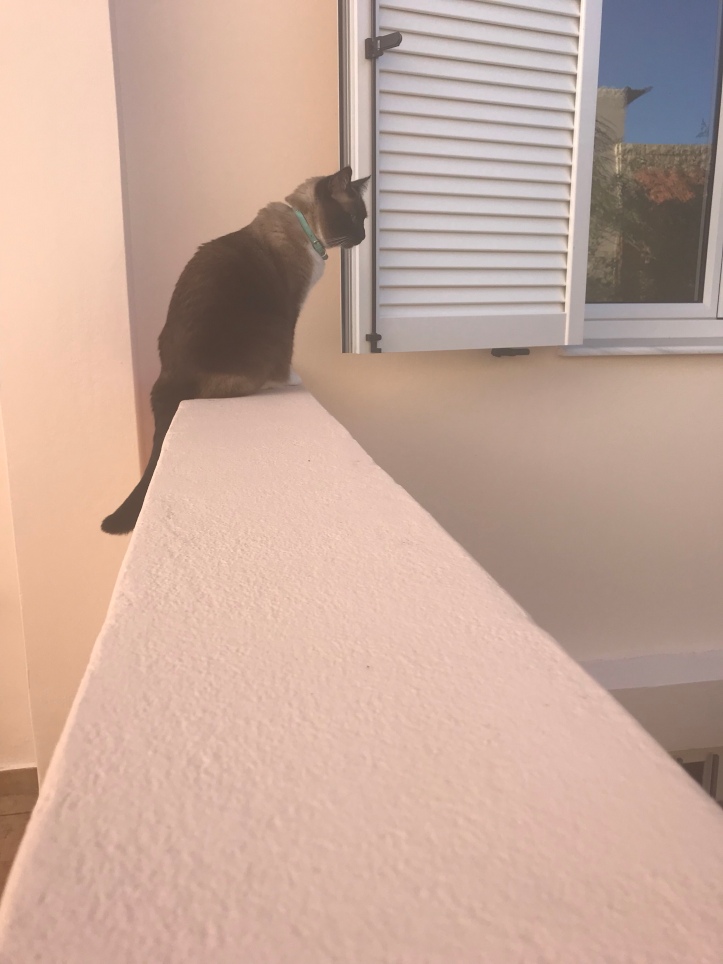 For now we have decided that she only gets to go out with supervision, of course now she wants to go out ALL the time. I need to get a lounger so I can go out and sit with her in the sun. We are planning to slowly build it up with flowers and plants when that happens I will post an update.

“The world is a book, and those who do not travel read only one page.” – Saint Augustine